This adhesive medallion salutes the mission of the U.S. Navy to support and strengthen America’s global military advantage.

Founded in 1775, the U.S. Navy has safeguarded America’s freedom and secured America’s interests throughout the world for more than 200 years.

Since its inception, the U.S. Navy has consistently and thoroughly outmatched America’s enemies in every environment, propelling the nation to victory against some of history’s most ruthless regimes. Ready at a moment’s notice to protect and defend the cause of liberty on near and distant shores, the Navy’s sailors and airmen have risen to each and every challenge, demonstrating superior skill and fearless determination in the discharge of their duties. Operating a highly modernized and sophisticated fleet, they lead the world’s most powerful maritime force.

This adhesive medallion salutes the mission of the U.S. Navy to support and strengthen America’s global military advantage. 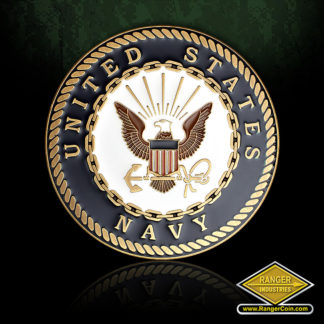