As a critical component of the Department of Homeland Security, the Coast Guard deploys its specialized marine and aviation assets to secure America’s coastlines, ports, and inland waterways. Patrolling and protecting more than 95,000 miles of coastline, 360 ports, and 3.4 million square miles of ocean, the courageous men and women of the U.S. Coast Guard stand always ready to confront and counter threats to the nation’s vital interests. Protecting the integrity of America’s maritime borders and serving as a key offshore intelligence gathering force, the U.S. Coast Guard plays a central role in strengthening the nation’s domestic defense capabilities.

This adhesive medallion salutes the U.S. Coast Guard’s mission to bolster America’s security by keeping vigilant watch over all of the nation’s waterways. The adhesive back allows this medallion to be affixed to most painted, metal or glass surfaces. 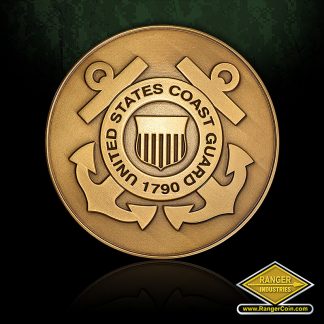