Founded at Tun Tavern in 1775, the U.S. Marine Corps has instilled fear in America’s enemies for more than two-hundred years.

Founded at Tun Tavern in 1775, the U.S. Marine Corps has instilled fear in America’s enemies for more than two-hundred years.

Employing one of the most grueling training regimens known to man, the Marine Corps is renowned for producing warriors who exhibit the highest levels of physical strength and mental toughness. Over the years, the Marines have lived up to their hard-won reputation as the “First to Fight,” serving on the front lines of some of the most intense battles in the history of modern warfare. Combining razor-sharp combat skills with an insatiable appetite for victory, Marines have earned their place as America’s fiercest warriors.

This key fob is dedicated to the tough fighting spirit and proud military tradition of the United States Marine Corps. Minted with exquisite detail in a proprietary brass alloy, the metal insignia is given an antique bronze finish. 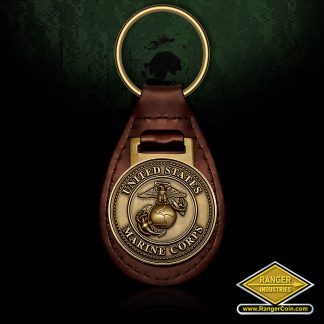