Originally founded in 1914 as the aviation division of the Army Signal Corps, the modern U.S. Air Force was founded in 1947. Since its inception, the Air Force has played a vital role in strengthening America’s homeland security and advancing the cause of freedom throughout the world. Recognized as the global leader in the development and application of air and space technology, the Air Force provides the U.S. Military with a distinct advantage over its enemies.Through the command and control of the world’s most advanced intelligence gathering and communications systems, Air Force personnel deliver critical support to American forces engaged in combat and enhance America’s capacity for domestic defense.

This adhesive medallion honors the commitment of the United States Air Force to develop and exploit aerospace technology in the defense of America’s global interests. Minted in a nickel alloy, this medallion contains rich enamel accents.

If you find a new use for these, send us a picture! 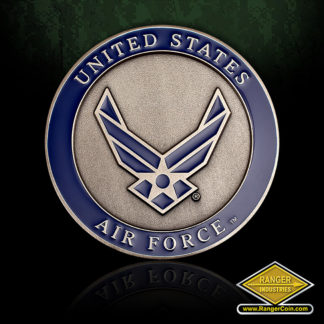