Focused on the care of individuals, families, and communities, nurses are dedicated professionals who help people recover their health and improve their quality of life.

Focused on the care of individuals, families, and communities, nurses are dedicated professionals who help people recover their health and improve their quality of life.

In medieval times, nursing-like care was provided by monks and nuns and the religious orders they were affiliated with. In 1860 Florence Nightingale started the first professional nursing school. Hospital-based training appeared in the early 1900’s. In the 19th and early 20th century, nursing was considered a women’s profession, just as doctoring was a men’s profession. With increasing expectations of workplace equality during the late 20th century, nursing became an officially gender-neutral profession.

This 1 3/4” antique nickel coin has enamel accents on both sides of the coin. The obverse features a red heart and the words “cute enough to stop your heart, skilled enough to restart”. The reverse shows the Rod of Asclepius against the Emergency Services Star of Life enameled in a periwinkle blue. Originally designed by the US National Highway Traffic Safety Administration, the 6 pointed blue Star of Life outlined with a white border is traditionally used in the United States as a certification for ambulances, paramedics and other EMS personnel. The Rod of Asclepius is a serpent-entwined rod that has become a symbol associated with modern medicine.

This is an NWTMINT surplus item. 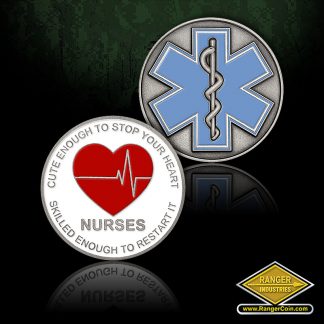