Comprised of more than 300,000 combat-ready personnel, the Army National Guard is a major component of America’s military arsenal. Honoring a commitment that extends well beyond “one weekend a month…” these men and women are fully prepared for prompt mobilization in times of war. On the home front, these dedicated soldiers execute critical disaster relief, law enforcement, and homeland defense missions.

Minted in a brass alloy, this coin contains rich enamel accents on both sides.

Each coin measures 1.75 inches (44mm) in diameter, with the reverse featuring an enravable area with the core elements of the Army’s ethos listed around the circumference: Loyalty, Duty, Respect, Service, Honor, Integrity and Courage. 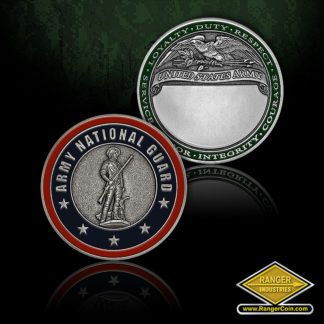