Heroes of the “Greatest Generation,” those who fought in World War II will always be remembered for defending freedom in its maximum hour of need.

Heroes of the “Greatest Generation,” those who fought in World War II will always be remembered for defending freedom in its maximum hour of need.

Their triumph against the forces of Germany, Italy, and Japan stands as one of history’s greatest achievements, sending a clear message to the world that tyranny will never be tolerated by those who love liberty. Engaging the enemy with fiery resolve on the battlefield, on the open sea, and in the skies above, these brave men demonstrated extraordinary valor, devoting all their energy, skill, and courage to achieving absolute victory. Their integrity and devotion to duty has come to define an entire generation and their sacrifices in the name of liberty have inspired generations of Americans since.

This coin pays tribute to the veterans of World War II, whose commitment to freedom will never be forgotten. The obverse features a rendering of the World War II Memorial, located on the National Mall in Washington, D.C. The reverse bears the World War II campaign ribbon and includes a space for engraving. 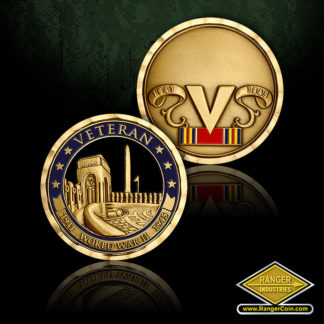