On April 27, 1979, four years after the Fall of Saigon, The Vietnam Veterans Memorial Fund, Inc. (VVMF) was incorporated as a non-profit organization to establish a memorial to veterans of the Vietnam War.

The 2-acre  site is dominated by a black granite wall engraved with the names of those service members who died as a result of their service in Vietnam and South East Asia during the war. The wall, completed in 1982, has since been supplemented with the statue The Three Soldiers and the Vietnam Women’s Memorial. The memorial includes the Vietnam Veterans Memorial wall, the Three Servicemen statue and the Vietnam Women’s Memorial. The Memorial Wall was designed by American architect Maya Lin. In 2007, it was ranked tenth on the “List of America’s Favorite Architecture” by the American Institute of Architects. As a National Memorial, it is listed on the National Register of Historic Places.

Honoring the men and women who served in the controversial Vietnam War, the Vietnam Veterans Memorial chronologically lists the names of 58,318 Americans who gave their lives in service to their country.

Minted in a brass alloy and finished in bronze, this coin is imbued with richly colored transparent enamel on both sides. 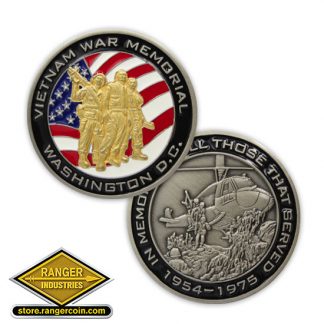