The guided-missile frigate takes her name from decorated WWII vet, Rear Admiral Rodger Whitten Simpson. During his commands in the war, he put loyalty and fortitude before his own wellbeing, earning him awards including the Navy Cross, the Gold Star, and the Legion of Merit.

No greater example exists of the FFG-56’s crew carrying on Admiral Simpson’s fortitude than their fierce attack against an Iranian intel facility posing as an oil rig and the complete devastation of the enemy’s ship, the Joshan. During the Iran-Iraq War the USS Simpson was one of three ships engaging in that victorious mission. But it was the USS Simpson that entered naval history during this battle by becoming the first Navy warship to destroy and sink an enemy’s vessel during a surface battle since the USS Constitution took down British ships in 1812. The fray was also the first Navy surface battle since World War II.

Minted in antique bronze, and highlighted by bold enamel, this challenge coin honors the crew of the USS Simpson (FFG-56). The obverse features the ship slicing through the sea, and flying boldly above the deck are her service dates and motto in English, “ATTACK with VIGOR”. The reverse displays the ship’s seal, including her motto in Rodger Simpson’s ancestral language, French.” 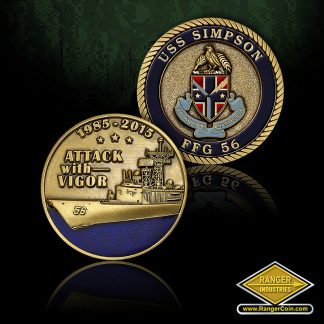