The USS Ronald Regan (CVN 76) is the ninth carrier in the Navy’s Nimitz Class and the first ship in Navy history to bear the name of America’s 40th President.

The USS Ronald Regan (CVN 76) is the ninth carrier in the Navy’s Nimitz Class and the first ship in Navy history to bear the name of America’s 40th President.

Bringing 4.5 acres of sovereign U.S. Territory to bear on America’s enemies throughout the world, the USS Ronald Reagan is the steel embodiment of President Reagan’s “Peace Through Strength” policy. With a total length of nearly 1,100 feet from bow to stern and measuring 134 wide at the beam, this massive ship displaces 95,000 tons fully loaded and boasts a top speed of 30 knots. Since its launch date of March 5, 2001, the USS Reagan and its crew of 5,000 have completed several missions in support of America’s global military strategy and have played a key role in advancing the success of Operation Iraqi Freedom and Operation Enduring Freedom.

This coin salutes the skilled service of all those who serve aboard the USS Ronald Reagan (CVN-76), whose dedication continues to strengthen America’s freedom. The obverse features the image of Ronald Reagan looming over the ship that bears his name. The reverse replicates the ship’s seal in stunning detail. Struck in high relief using special “splash” dies, every element of this coin’s design is rendered in crisp detail. Minted in a brass alloy, this coin is accented with an antique bronze finish. Each coin comes packaged with a detailed header card that describes the role of the USS Ronald Reagan in defending America.

This is a surplus NWTMint item. Packaging may vary. 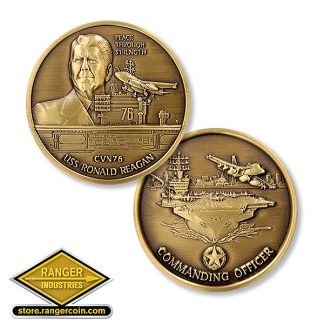