Recognizing the importance of supporting the United States to help deliver the people of Vietnam from the terrible threat of communism, Harold E. Holt, the 17th Prime Minister of Australia, courageously and controversially led Australians to battle side-by-side with America in support of the Republic of Vietnam against their brutal invaders.

Recognizing the importance of supporting the United States to help deliver the people of Vietnam from the terrible threat of communism, Harold E. Holt, the 17th Prime Minister of Australia, courageously and controversially led Australians to battle side-by-side with America in support of the Republic of Vietnam against their brutal invaders. Holt’s commitment to freedom was emphasized in his bold 1966 speech in support of U.S. President Lyndon Johnson, who was the target of so many protests:

“…And so, sir, in the lonelier and perhaps even more disheartening moments which come to any national leader, I hope there will be a corner of your mind and heart which takes cheer from the fact that you have an admiring friend, a staunch friend that will be all the way with LBJ.

This was not lip service. Holt arranged for 6,000 troops and a secret base at Pine Gap in Australia’s Northern Territory for the American war effort in Vietnam. Holt was as true a friend as America or its military forces ever needed in any conflict.
Holt’s life came to a tragic end far too early.

Swimming near Cheviot Beach on Point Nepean, an area known for its deadly rip tides and strong currents in 1967, Holt disappeared at sea, and his body was never recovered. Some called his death mysterious.

For his unfaltering backing of the United States at political (and perhaps personal) risk, in 1969 the U.S. Navy designated a Knox-class frigate in his name to honor America’s resolute Australian ally. The ship and her crew served dutifully. One of the USS Harold E. Holt’s most memorable engagements was against the Cambodian Khmer Rouge in the battle to re-take the pirated SS Mayaguez in 1975 as the war in Vietnam concluded.

The dutiful service record of the Harold E. Holt proved to be an additional honor to her worthy namesake. Despite being deployed unexpectedly early to help counteract the North Vietnamese Easter Offensive in 1972, Harold E. Holt and her crew served admirably, engaging in numerous firefights in her escort roles near the city of Quảng Trị, heroically shrugging off damage from the enemy’s heavy batteries and mines to complete her missions, earning the ship and her crew a Meritorious Unit Commendation award in 1972.

The Harold E. Holt was decommissioned in 1992.

Now you can carry a part of the Harold E. Holt legacy in your pocket with Northwest Territorial Mint’s challenge coin. Whether you, a family member, or friend served aboard, or you appreciate the legacy of the ship and its namesake, or are a proud Australian who celebrates the friendship between long-time allies, this nostalgic keepsake is for you. The obverse depicts the official Harold E. Holt seal in colorful enamel and nickel antique highlights, with an equally detailed reverse featuring a portrait of Holt alongside the eponymous Knox-class frigate, superimposed over Australia, highlighted in striking patriotic red, white, and blue enamel with the ship’s mantra of Honor, Pride, Professionalism, Prevail emblazoned around the circumference. 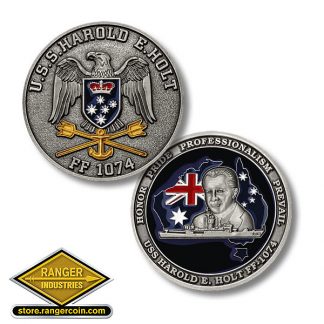