USS Frank E. Petersen Jr. (DDG-121) is an Arleigh Burke-class Flight IIA guided missile destroyer in the United States Navy, the 71st overall for the class. The ship was named for United States Marine Corps Lieutenant General Frank E. Petersen Jr. the first African-American Marine Corps aviator and the first African-American Marine Corps general. The contract for the ship, along with the name, was first announced in a press release from Huntington Ingalls Industries on 30 March 2016.

This coin is struck in a shiny frosted finish and features special transparent enamel combined with a 3D UV-printed representation of the ship that gives an impression that can be both seen and felt. The reverse proudly displays the ship’s crest in colorful enameled detail. 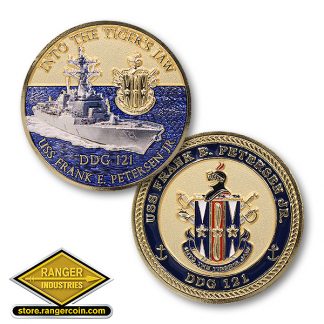