Launched on September 24, 1960 the USS Enterprise holds the distinction as the world’s first nuclear-powered aircraft carrier.

Launched on September 24, 1960 the USS Enterprise holds the distinction as the world’s first nuclear-powered aircraft carrier.

Named in honor of the most decorated ship of World War 2, the USS Enterprise (CVN-65) has compiled a long and distinguished service record of its own, earning several Navy Unit Commendations for her outstanding performance over more than four decades. Measuring 1,101 feet from bow to stern, the “Big E” carries a full complement of 85 aircraft and more than 5,800 officers and crew. Executing a vital role in America’s Global War on Terrorism, the USS Enterprise’s mighty decks launched some of the first air strikes of Operation Enduring Freedom in 2001. 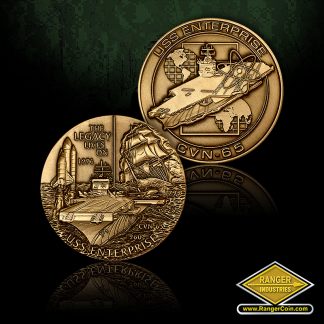