Immortalized on this stunning challenge coin, the USS Carney (DDG-64) prowls the seas as one of the most sturdy and technically sophisticated destroyers in the U.S Navy’s arsenal.

Commissioned in 1996, the USS Carney tirelessly plays her role as a multi-mission vessel. Whether for life-saving civilian search-and-rescue or fierce military combat, the ship and her crew are thoroughly prepared for all missions. With the most highly-advanced missile and undersea-detection systems, the Carney bears the weaponry and technology best suited to evade and devastate the enemy, either sailing solo or as a member of a strike group. Her all-steel construction armors her for maximum survivability against threats from sea and air, near and far.

Minted in antique bronze, and highlighted by bold hand-applied enamel, this challenge coin honors everyone who has served and fought aboard the USS Carney (DDG-64).The obverse features a detailed profile of the ship and a boldly enameled depiction of Spain delineated in the red and yellow of the Spanish flag. The reverse features the ship’s seal in bold red, white, and blue, with the words “505 FEET of AMERICAN FIGHTING STEEL” – a nod to her ferocity and durability.

This is a surplus NWTMint item, packaging may vary. 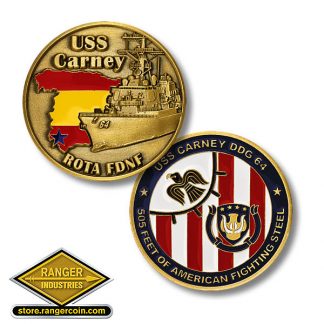