Dubbed “America’s Favorite Carrier,” the USS Carl Vinson (CVN 70) has served as an active-duty carrier in the U.S.’s famed Nimitz class since 1982.

Dubbed “America’s Favorite Carrier,” the USS Carl Vinson (CVN 70) has served as an active-duty carrier in the U.S.’s famed Nimitz class since 1982.

Stretching 1,088 feet in length and displacing 91,300 tons, the Carl Vinson boasts a massive 4.5 acre flight deck. The ship carries more than seventy combat ready aircraft and is capable of traveling at thirty-five knots. Since being commissioned, the Carl Vinson has completed more than a dozen deployments and was one of the first American warships to launch the crippling air strikes on Kabul Afghanistan that led to the fall of the renegade Taliban regime.

This remarkable coin commemorates the outstanding service of the USS Carl Vinson and its crew of more than 5,000 sailors. Minted in a brass alloy and finished in antique bronze, this coin comes packaged with a detailed header card that pays tribute to the USS Carl Vinson’s considerable contribution to America’s defense. 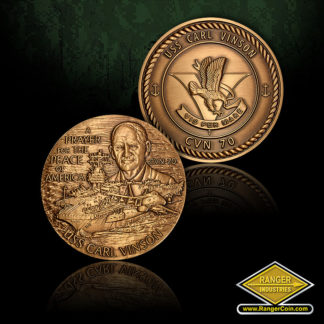