The USS Arlington is the third ship in the United States Navy to be named for Arlington, Virginia, the location of the Pentagon. She is named in commemoration of the September 11, 2001 attacks, and steel taken from the Pentagon after the September 11 attacks is displayed aboard in the ship’s museum. Commissioned on 8 February 2013, the USS Arlington has a displacement of approximately 25,000 tons and stretches some 684 feet in length. Due to its amphibious support capabilities, the USS Arlington is ideally suited to support the Navy’s critical mission abroad, and can carry a fully equipped battalion of approximately 800 Marines.

The USS Arlington (LPD-24) plays a critical role in America’s naval superiority across the globe. A San Antonio-class amphibious transport dock, she is well equipped to support amphibious operations in any theater.

This is a surplus NWTMint item, packaging may vary.

This is an out of date design and will not be remade after product is sold out. 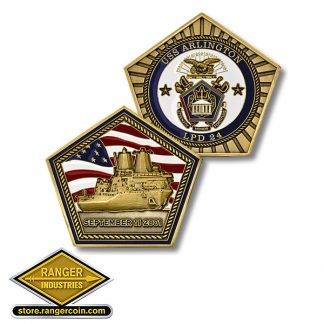