This coin salutes the outstanding courage and skill of all those who serve the U.S. Navy in the proud tradition of the Seabees.

The Seabees, the U.S. Navy’s famed mobile construction battalions, design and build the Navy’s critical infrastructure throughout the world.

Renowned as a highly responsive and flexible force, the proud members of the Seabees stand ready to deploy anywhere in the world to support the global mission of the America’s military. Building and fighting for freedom, they erect bridges, roads, command posts, housing units, and hospitals to sustain the warfighting efforts of America’s men and women in uniform. Serving as expert technicians and fearless warriors, they have played a vital role in the success of U.S. Military operations for more than fifty years.

This coin salutes the outstanding courage and skill of all those who serve the U.S. Navy in the proud tradition of the Seabees.

The obverse contains the distinctive Seabee emblem. Framed by the slogan “We Build. We Fight.” on the coin’s reverse is the official Seabee seal.

Minted in a brass alloy, this coin is imbued on both sides with the traditional colors of the U.S. Navy. 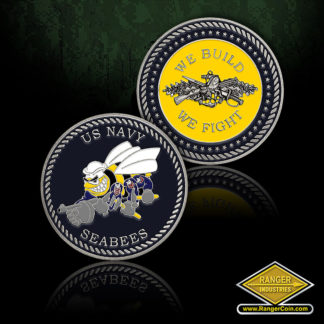