Experienced and accomplished technicians, they skillfully employ a hands-on approach as they train and mentor the sailors in their command. Exhibiting a fierce pride in their achievements, Chief Petty Officers execute their assigned duties with trademark zeal. Serving as models of efficiency and resourcefulness, they contribute immeasurably to the success of the Navy’s missions throughout the world. Possessing an instinct for action, they play a vital role in propelling the Navy forward to victory.

This coin salutes the outstanding achievement and tireless dedication of all Chief Petty Officers, who serve the U.S. Navy with distinction.

Depicted in brightly colored enamel on the obverse is the specialty insignia for the rate of Chief Petty Officer. The reverse features the eagle emblem of the U.S. Navy centered between two fouled anchors, each depicted below the letters “USN.” The reverse also contains a space for engraving.

Minted in a nickel alloy, this coin contains an antique finish.

This coin is packaged in our signature Ranger Industries protective polymer coin flip with a licensed United States Navy hologram sticker so you know you’ve purchased from an official source! 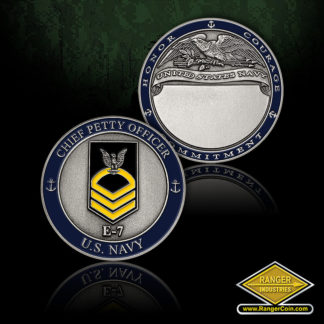