Each Marine Base Quantico Coin is struck in eye-catching shiny brass with vivid color enamel.

Each Marine Base Quantico Coin is struck in eye-catching shiny brass with vivid color enamel.

Even when not in uniform, every Marine can proudly carry this symbol of USMC pride on their person, or proudly display on their desk or shelf. Officially Licensed with the United States Marine Corps, you can rest assured that the symbols of the Marines are shown with honor.

Each coin measures 1.75 inches (44mm) in diameter, with the reverse featuring the USMC’s Eagle, Globe and Anchor seal struck in detailed 3D.

This coin is packaged in our signature Ranger Industries protective polymer coin flip with a licensed United States Marine Corps hologram sticker so you know you’ve purchased from an official source! 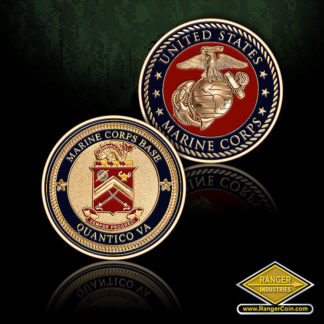