Established in 1989 as a Major Command of the U.S. Army, the mission of the U.S. Army Special Operations Command is to train, equip, mobilize, deploy, and sustain special operations forces to conduct clandestine missions throughout the world.

The obverse contains a rendering of the official Shoulder Sleeve Insignia of the Army Special Operations Command, which features a single-handled black sword against a red backdrop. The reverse bears the USASOC Distinctive Unit Insignia, which includes the shoulder patch design surrounded by flames and contains the Latin phrase “Sine Pari,” which is translated “Without Equal.”

Minted in a brass alloy and finished in bronze, this coin is imbued with enamel on both sides. 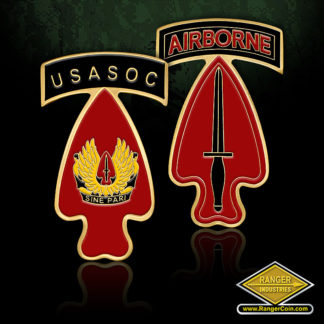