Standing in vigilant defense of America’s freedom night and day, the Retired Soldiers of the U.S. Army are genuine American heroes.

Standing in vigilant defense of America’s freedom night and day, the Retired Soldiers of the U.S. Army are genuine American heroes.

Serving with pride as members of an honorable military tradition, these tough-minded warriors answered the call time and again to protect America’s sovereignty and preserve liberty around the world. Through their courage and devotion to duty, they have earned the admiration of their superiors and the enduring respect of the men and women they have led throughout their distinguished careers. Contributing to the strength of the world’s most powerful military force, they leave a lasting legacy of service and achievement.

This coin salutes all Retired Army personnel, whose steadfast commitment to the defense of freedom has strengthened America’s security. The obverse features a rendering of the Stars and Stripes beneath the Army slogan “This We’ll Defend.” The word “Retired” is boldly imprinted along the rim. The reverse bears the U.S. Army emblem.

Struck in a brass alloy, this coin is accented with bright enamel on both sides. 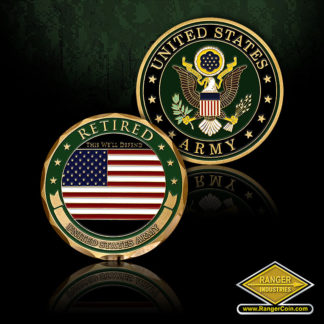