Executing its mission to keep the American people informed, the U.S. Army’s Public Affairs Branch plays an important role in advancing the cause of freedom throughout the world.

Executing its mission to keep the American people informed, the U.S. Army’s Public Affairs Branch plays an important role in advancing the cause of freedom throughout the world.

Managing community relations activities and controlling the exchange of information between the Army’s top leadership and the American public, the Army’s Public Affairs professionals help to foster confidence in America’s armed forces and increase their capacity to operate effectively in both peace and war. In addition to handling all external communications priorities, the military and civilian personnel of the Public Affairs Branch direct internal communication efforts designed to integrate the Army’s vast resources.

This coin salutes the commitment demonstrated by the Army’s Public Affairs experts to keep the American public informed of the Army’s mission.

Minted in a bronze alloy and finished in antique bronze, this coin contains colorful enameling on both sides. The obverse replicates the design and detail of the Public Affairs branch plaque, which contains a heraldic lightning bolt depicted behind a quill and a broadsword, all symbolizing the power and speed of the Army’s information exchange capabilities. The reverse contains the official seal of the U.S. Army. 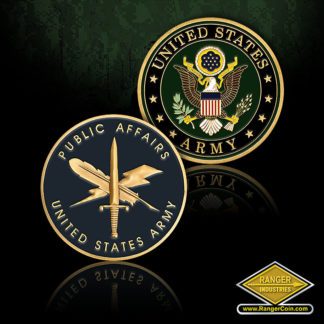