Working tirelessly to sharpen their skills and improve their performance, they earn the confidence of their commanders and the trust of their fellow soldiers. Efficiently implementing orders from above, they exhibit practiced discipline and uncompromising integrity, faithfully serving to steadily advance the Army’s mission throughout the world. Fully prepared to fight at a moment’s notice to defend the cause of freedom, they are the foundation of America’s military arsenal.

Minted in bold green and gold enamel on the coin’s obverse is the Army Private First Class rank insignia.

Struck in a brass alloy, this coin’s rich antique bronze finish is accented by colorful enamel highlights throughout. Each coin comes packaged with a detailed header card that describes the contributions of Privates First Class to the successful completion of the Army’s global mission.

Each coin measures 1.75 inches (44mm) in diameter, with the reverse featuring an engravable area with the core elements of the Army’s ethos listed around the circumference: Loyalty, Duty, Respect, Service, Honor, Integrity and Courage. 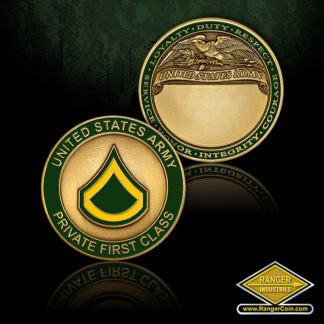