Hooah Soldier! Don’t be caught without your Five-Sided US Army Pentagon Challenge Coin! These make great gifts for friends and family. Proudly carry your Army spirit!

Each US Army Pentagon Challenge Coin is struck in eye-catching shiny brass with vivid enamel that captures the colors of the US Army emblem.

Even when not in uniform, every soldier can proudly carry this symbol of Army pride on their person. Officially Licensed with the United States Army, you can rest assured that the green and black are displayed with honor. This coin also makes a great gift for family members who want to display the shared pride in their soldiers.

Each coin measures 1.75 inches (44mm) tall, with the five-sided pentagon shape representative of the Department of Defense’s famous headquarters. The color enamel and intricate detail make the Army emblem immediately recognizable to all who see. 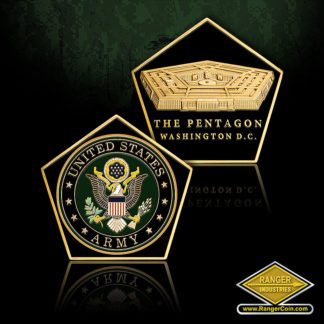