Once assigned to an Airborne unit, these elite soldiers of the sky are capable of deploying worldwide within 18 hours for missions ranging from peacekeeping efforts to engaging the enemy on the battlefield. If you are a friend of an air warrior parachutist, give this impressive challenge coin as a valued gift. If you have earned your US Army Paratrooper Badge, carry this coin to produce when you are in the company of other sky soldiers – or to show to those with whom you’d like to share your accomplishment.

The US Army Paratrooper Badge challenge coin is minted in a rugged nickel alloy and brushed with an antique finish. It is struck using special “splash” dies, which provide deep relief and beautiful detail.

Each coin measures 1.75 inches (44mm) in diameter, with the reverse featuring an enravable area with the core elements of the Army’s ethos listed around the circumference: Loyalty, Duty, Respect, Service, Honor, Integrity and Courage. 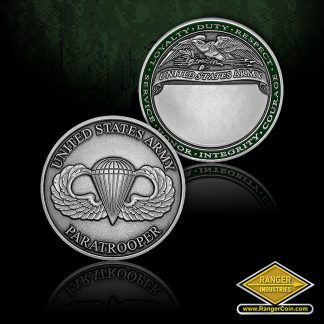