Charged with providing security for U.S. Army commands and installations throughout the world, the highly trained soldiers who serve the Military Police Corps uphold and enforce the Army’s regulations, assist with maneuver and mobility support, and oversee interment and resettlement operations.

Founded in 1941, the Military Police Corps has served to strengthen the discipline and effectiveness of America’s Army for more than sixty years.

This coin honors the dedication of every member of the Army’s Military Police Corps, whose constant vigilance and proven courage enhance America’s military power. Against a green enameled backdrop, the obverse replicates the design and detail of the Military Police Branch Plaque, which contains a pair of crossed “Harper’s Ferry” pistols. The reverse bears the official seal of the U.S. Army.

Minted in a brass alloy and finished in bronze, this coin is imbued with richly colored enamel on both sides. 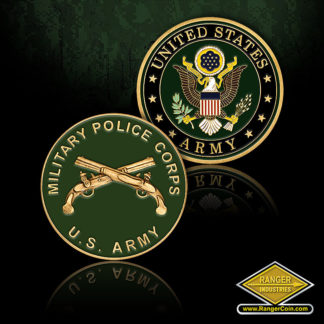