This coin salutes the proud heritage and vital mission of the U.S. Army’s Medical Corps, which has served to bolster the strength of America’s soldiers for more than two-hundred years.

The U.S. Army’s Medical Corps traces its history to 1775, when the Continental Congress established the first Army hospital in Boston, Massachusetts.

The Medical Corps is one of the six officer branches of the Army Medical Department (AMEDD) and is a special branch of the U.S. Army. Comprised entirely of trained physicians who provide professional medical care for soldiers, its primary mission is to sustain the strength of America’s fighting forces throughout the world. In addition to providing hands on patient care, the highly skilled officers of the Army’s Medical Corps develop and oversee public health and disease prevention training modules and inform and advise commanders on methods for optimizing the health and vitality of all military personnel.

This coin salutes the proud heritage and vital mission of the U.S. Army’s Medical Corps, which has served to bolster the strength of America’s soldiers for more than two-hundred years. Against a maroon enameled backdrop, the obverse replicates the design and detail of the Medical Corps Branch Insignia, which contains the gold colored metal caduceus typically associated with the medical profession. The reverse bears the official seal of the U.S. Army.

Minted in a brass alloy and finished in antique bronze, this coin is imbued with enamel on both sides. 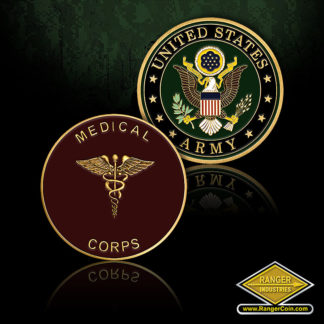