This coin salutes the U.S. Army Medical Command’s commitment to sustaining the strength of America’s Soldiers. The obverse contains MEDCOM’s official Shoulder Sleeve Insignia, which replicates the sword and snake design used to represent the field of medicine throughout the world. The reverse contains the Distinctive Unit Insignia of the Army Medical Command, which is dominated by a maroon cross and surrounded by a banner that reads: “Responsive and Dedicated.”

Minted in a brass alloy and finished in bronze, this coin contains enameling on both sides. 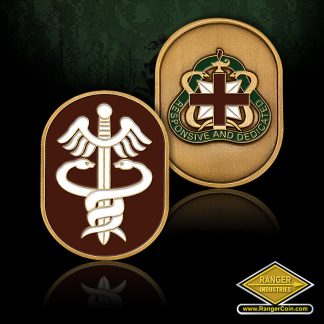