Utilizing the world’s most advanced long range weapons systems to suppress and defeat America’s enemies, the Army’s Field Artillery Branch is vital to the success of U.S. Military operations throughout the world.

Headquartered at Fort Sill in Oklahoma, the Field Artillery Branch is one of the Army’s three main combat arms forces.

Minted in a brass alloy and finished in bronze, this coin is imbued with rich enamel on both sides. 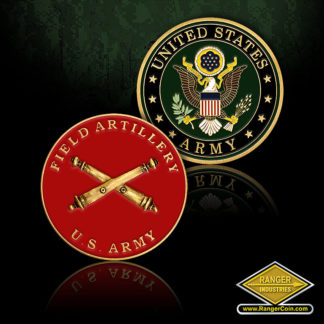