Founded in 1779, the Army Corps of Engineers (USACE) has served as an indispensable component of America’s Armed Forces for more than two centuries.

Founded in 1779, the Army Corps of Engineers (USACE) has served as an indispensable component of America’s Armed Forces for more than two centuries.

Comprised of approximately 35,000 military and civilian scientists, engineers, and other specialists, the Army Corps of Engineers is organized geographically into 8 divisions and 41 subordinate districts throughout the U.S. Europe, and Asia. Supporting America’s engineering needs in times of war and peace, USACE focuses its efforts on building and sustaining critical infrastructure throughout the world to enhance America’s security and protect the nation’s vital global interests.

Minted in a brass alloy and finished in antique bronze, this coin is imbued with rich enamel accents on both sides. 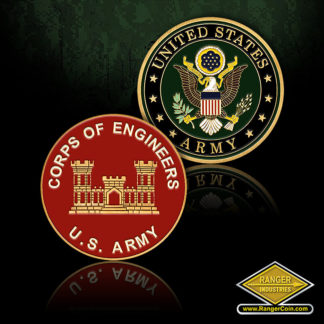