This coin salutes the skill and dedication of every member of the U.S. Army’s Chemical Corps, whose expertise helps enhance the combat capabilities of America’s Armed Forces.

Shielding American forces from the threat of weapons of mass destruction, the Army’s Chemical Corps is an essential component of the U.S. Military arsenal.

Founded as the Chemical Warfare Service on June 28, 1918 during the final months of World War I, it was made an official branch of the Regular Army in 1920 and designated as the Chemical Corps in 1945. As part of their mission, the skilled officers of the Chemical Corps are charged with developing doctrine, tactics, equipment, and training designed to provide critical force protection to America’s warfighters in the event of a Nuclear, Chemical, or Biological attack. These highly trained experts prepare nuclear and chemical incident control plans, conduct decontamination training exercise, and oversee inspections of the Army’s chemical munitions and materiel.

This coin salutes the skill and dedication of every member of the U.S. Army’s Chemical Corps, whose expertise helps enhance the combat capabilities of America’s Armed Forces. The obverse replicates the design and detail of the Chemical Corps Branch Plaque, which features a benzene ring superimposed upon a pair of crossed retorts. The reverse bears the official seal of the U.S. Army.

Minted in a brass alloy and finished in bronze, this coin contains rich enamel accents on both sides. 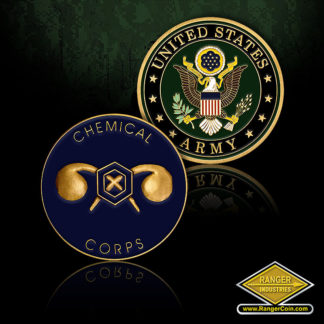