Inspiring America’s warriors to victory for more than two-hundred years, Army Bands are an integral component of the U.S. Military.

Inspiring America’s warriors to victory for more than two-hundred years, Army Bands are an integral component of the U.S. Military.

The U.S. Army Bands Program is the largest military music program in the world, containing 104 active-duty and reserve bands serving all across the globe. Comprised of Special Army Bands and General and Direct Support Bands, it operates across the full spectrum of U.S. Military operations to support the nation’s strategic objectives.

This coin salutes the skill and commitment of all those who serve their country as members of the U.S. Army Bands Program. The obverse replicates the design and detail of the Army Bands official Branch Plaque, which contains a gold colored lyre set against a deep blue backdrop. The reverse contains the official seal of the U.S. Army.

Minted in a brass alloy and finished in bronze, this coin is imbued with bold enamel accents. Each coin comes packaged with a detailed header card that describes the mission and history of the U.S. Army.

This is a surplus NWTM item featuring a legacy design, and once sold-out, will not be remade. 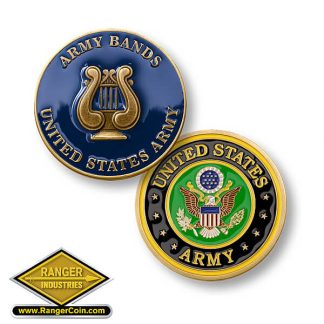