It's Breast Cancer Awareness Month - Click here to DONATE to stop the disease that affects 1 in 8 women during their lifetime.

This coin salutes the skilled and dedicated personnel of the U.S. Army Aviation Branch, whose commitment to excellence ensures America’s continued military dominance.

Capitalizing on their aerial fire and maneuver capabilities, Army Aviation units provide critical combat support to aid ground forces in completion of their mission. Tracing its history back to the Army Air Corps, which was established in 1918, Army Aviation received its first major test during World War 2, when light aircraft were used for artillery forward observation and reconnaissance. Enhancing the U.S. Army’s capacity for force projection and rapid transport, the Aviation Branch serves as a vital asset to America’s military arsenal.

This coin salutes the skilled and dedicated personnel of the U.S. Army Aviation Branch, whose commitment to excellence ensures America’s continued military dominance. The obverse replicates the wing and propeller design of Army Aviation’s Branch Plaque. The reverse bears the official seal of the U.S. Army.

Minted in a brass alloy and finished in bronze, this coin is imbued with bold enamel highlights on both sides. 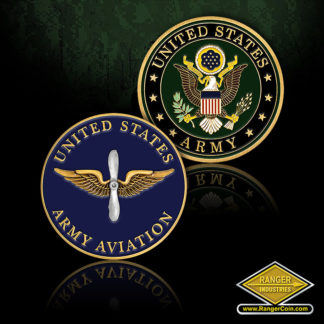