Fort Rucker is often referred to as “Mother Rucker”; it is common knowledge in an Army Aviation career, that “Everyone returns to Mother Rucker,” because of the frequency of pilot training, and re-education.

This coin honors Fort Rucker and salutes all who have been stationed there. This coin is minted in a proprietary brass alloy using a special splash minting process. Thicker blanks are used and the splash minting results in a heavier coin with deeper relief and much greater realism and detail in the coin than a conventional die struck coin. The coin is given an antique bronze finish and packaged in a polybag with a detailed header card. 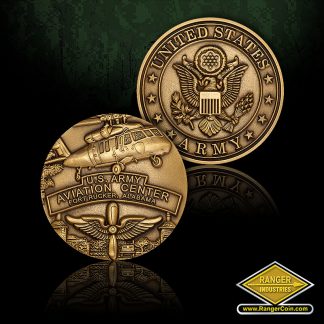