The mainstay of the Army’s awesome speed, power, and precision, the Armor Branch is vital to the success of U.S. Military Operations throughout the world.

The mainstay of the Army’s awesome speed, power, and precision, the Armor Branch is vital to the success of U.S. Military Operations throughout the world.

Tracing its origins back to Army’s Cavalry units, the Tank Service was formed in 1918 and Armor officially became a permanent branch in 1950. During World War I, the 1st Light Tank Battalion was formed under the command of the legendary General George S. Patton, providing armored support for American forces throughout the St. Mihel Offensive and other critical campaigns. During World War II, the Army’s Armored Divisions played a key role in halting the German advance and liberating Europe from Nazi aggression. Serving in every major American military operation over the past eighty years, the Army’s Armored Branch has been instrumental to America’s military power.

This coin salutes the soldiers who proudly serve the U.S. Army’s Armored Branch, whose courage and commitment have strengthened America’s security. The obverse replicates the detail and design of Armor’s Branch Plaque, which contains a pair of crossed sabers, depicted behind a tank. The reverse bears the official seal of the U.S. Army. 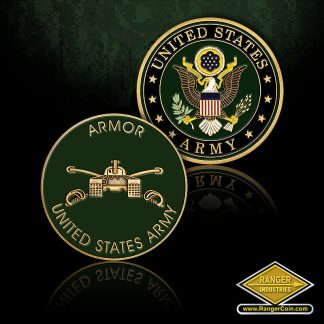