Providing vital support to the U.S. Army’s Field Commanders throughout the world, the Soldiers of the Adjutant General’s Corps bolster the strength of the America’s military arsenal.

Providing vital support to the U.S. Army’s Field Commanders throughout the world, the Soldiers of the Adjutant General’s Corps bolster the strength of the America’s military arsenal.

Charged with the mission of providing personnel and administrative service support for the Army of the twenty-first century, the soldiers and officers of the Adjutant General’s Corps manage all military personnel activities, including tracking awards and promotions, maintaining all personnel files and records, and handling the Army’s postal operations throughout the world. Tracing its origins back to the Revolutionary War with the appointment of the Army’s first Adjutant General in 1775, the Corps has served the needs of America’s fighting forces for more than two-hundred years.

This coin salutes the dedicated and skillful service of all members of the U.S. Army’s Adjutant General’s Corps, whose commitment to excellence advances America’s global military mission. The obverse replicates the design and detail of the AG Corps’ Branch Plaque, which contains a shield bearing thirteen stars and imbued with the national colors. The reverse contains the official seal of the U.S. Army.

Minted in a brass alloy and finished in antique bronze, this coin contains bold enamel highlights on both sides.

Each coin measures 1.75 inches (44mm) in diameter and is packaged in our signature Ranger Industries protective polymer coin flip. 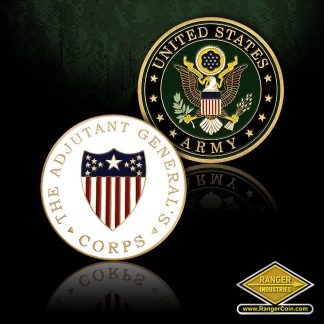