Air Force Veterans embody the commitment to victory that has made the U.S. Air Force the world’s most dominant aerospace force for more than 60 years.

Air Force Veterans embody the commitment to victory that has made the U.S. Air Force the world’s most dominant aerospace force for more than 60 years.

Defending America’s strategic interests throughout the world, their bold actions and decisive leadership have strengthened the nation’s security. Applying their unmatched technical expertise, they have expanded America’s global reach and provided the U.S. Military with a distinct advantage over its enemies. Whether flying into hostile territory or providing vital combat support, these brave men and women have played a decisive role in protecting freedom around the world.

This coin is dedicated to the service of all Air Force Veterans, whose courageous service ensures the success of America’s military operations. The obverse features the Army Air Corps wing and star emblem. The reverse features a rendering of the American flag with “USAF” superimposed. 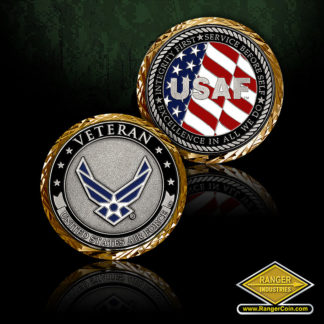