Struck in antique brass with colorful enamel, this United States Air Force Challenge Coin celebrates the dedicated Airmen who serve Headquarters Air Force, who under the direction of the Secretariat and Air Staff develop warfigther plans and policy that support the USAF mission worldwide.

Headquarters Air Force is made up of two distinct components: the Secretariat and the Air Staff. Under the direction of the Secretary of the Air Force, these organizations and all of their subordinate assets support the implementation of the Air Force mission throughout the world. Developing policies, plans, and programs to strengthen resource integration and enhance the ability of warfighters to achieve victory, Headquarters Air Force plays an essential role in protecting America’s interests throughout the world.

This coin salutes the skill and dedication of all those who serve Headquarters Air Force. The obverse bears the nostalgic wing and star emblem of the Army Air Corps, also called the “Hap Arnold” wings. The reverse features the official Air Force emblem.

Struck in a brass alloy, this coin is accented on both sides by bright enamel highlights. 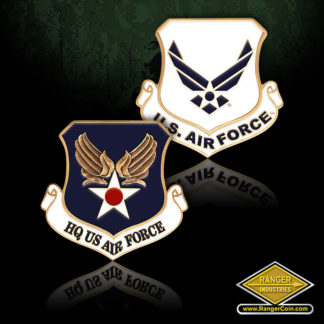