Air Force Global Strike Command provides combat-ready forces to conduct strategic nuclear deterrence and global strike operations in support of the US Commander in Chief and combatant commanders. Established in 2009, Air Force Global Strike Command is responsible for America’s three intercontinental ballistic missile wings, its two B-52 wings and sole B-2 wing. All told, more than 22,000 highly trained and disciplined personnel have earned the special trust and the awesome responsibility for wielding the most powerful weapons in America’s arsenal. Their expertise makes it possible for the United States to strike anywhere on the planet with maximum force should it become necessary – and to remain steadfast and ready at all times to maintain global stability.

This coin salutes the mission of the Air Force Global Strike Command in its fearsome obligation to deliver history’s most potent weaponry with precision at a moment’s notice – and the personnel who shoulder that mission with pride and dedication. The obverse features the Command’s emblem. Its globe reflects the command’s global reach; its golden wings represent dominance in the air and hearken to its Army Air Corps lineage. Blue represents the sky, the star signifies clarity of purpose to maintain readiness and deter adversaries; the red disc stands for Airmen past and present and the sacrifices they have made to achieve mission goals. Its lightning flashes are symbolic of the speed and power that the Air Force Global Strike Command can bring to bear should it become necessary. The reverse bears the official symbol of the US Air Force.

Carry this coin as one of history’s most powerful and trustworthy warriors – entrusted with great power, and judicious in its use. 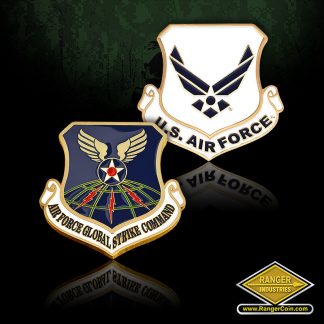