The reward for mastery of a full range of technical and tactical skills and the leadership necessary to inspire those under their command to successfully complete every operation is to be named as a Field Officer of the United States Air Force. In the USAF hierarchy, the Field Grade Officers — Major, Lieutenant Colonel, and Colonel — are second only to Senior Officers in rank. They help the Air Force maintain its essential role in America’s national security, and excel in leading men and aircraft in their missions against America’s enemies across the globe.

Minted in nickel, this challenge coin is enameled colorfully in Air Force blue. This coin salutes the outstanding efforts of America’s Air Force field grade officers, whose ability to lead and inspire keeps our nation safer. The obverse bears the wing and star emblem of the new Air Force symbol is based on the familiar World War II “Hap” Arnold wings and represents the service’s heritage. The symbol’s modern design represents the Air Force’s present and future leading edge capabilities defending the United States. 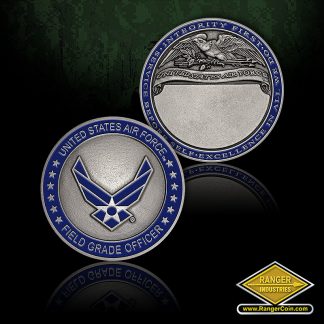