The foundation of America’s Air Force,  Airmen Basic provide critical support to bolster the strength of the world’s most advanced aviation force.

The foundation of America’s Air Force,  Airmen Basic provide critical support to bolster the strength of the world’s most advanced aviation force.

Dedicated to sustaining America’s air superiority, they function as the basic element of every Air Force Command, mastering the core skills necessary to lead American forces to victory. Exhibiting unmatched enthusiasm and tireless dedication to their duties, Airmen Basic serve to strengthen the capacity of the Air Force to engage and defeat America’s enemies throughout the world. Preparing aircraft for deployment and supporting the communication and navigation needs of forces engaged in combat, they are vital to the success of U.S. military operations around the globe.

This coin is dedicated to the proven commitment and courage of all Airmen Basic, whose steady service helps keep America safe. 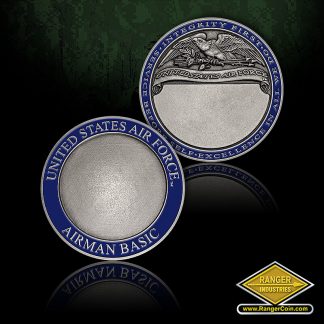