Based at Langley Air Force Base in Virginia, the ACC is the chief provider of combat-ready aircraft to every major U.S. warfighting command throughout the world. With expert skill and proven dedication, the more than 110,000 military and civilian employees of the Air Combat Command operate, equip, and maintain the world’s most advanced aircraft, guaranteeing their readiness for rapid deployment. Working to ensure the continuation of America’s air superiority, the members of the ACC serve to strengthen the American military’s global reach.

Minted in a brass alloy, this coin is imbued with colorful enamel on both sides.

This coins dimensions are 2 x 2 inches. 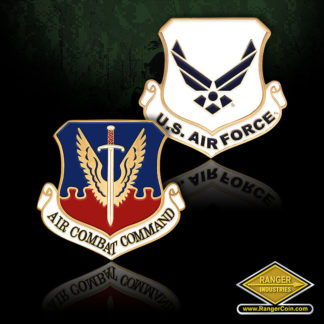