ON CLEARANCE - Click Here to View All Clearance Items

Vigilant defenders of America’s freedom, the retired men and women of the U.S. Navy are genuine American heroes.

Vigilant defenders of America’s freedom, the retired men and women of the U.S. Navy are genuine American heroes.

Exhibiting the highest levels of courage, honor, and commitment in the discharge of their duties, they willingly braved the unknown to confront difficult and dangerous challenges, decisively defeating America’s enemies throughout the world. Members of a proud tradition that reaches back to the founding of this great nation, those who have retired from the U.S. Navy join a distinguished class of warriors. Contributing to the strength of the world’s most powerful maritime force, they leave a lasting legacy of service and achievement.

This coin is dedicated to all retired Navy personnel, whose noble sacrifice has strengthened America’s security.

Struck in a brass alloy and imbued with enamel accents on both sides, this coin is packaged with a detailed header card that describes the strong conviction and dedication to duty shown by retired members of the U.S. Navy.*

*This is a surplus NWTMint item – packaging may vary. 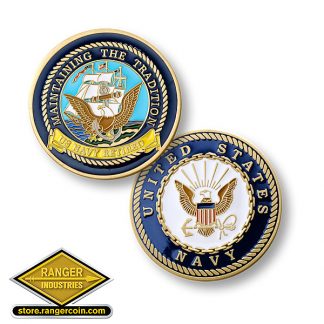