Headquartered in Norfolk, Va., USJFCOM is made of more than 1.1 million active and reserve soldiers, sailors, airmen, and Marines all working toward the same mission of optimizing and fully integrating the combat resources of America’s military. To achieve this mission, USJFCOM operates and maintains four service components and eight subordinate activities, including personnel from each branch of the U.S. Military, as well as civil servants, contract employees, and consultants.

This pin salutes the outstanding contribution of the U.S. Joint Forces Command (USJFCOM) and all who serve this force to the military power of the United States, and features the official emblem of USJFCOM. Made in a shiny brass alloy, this shield-shaped pin is imbued with full color enamel. 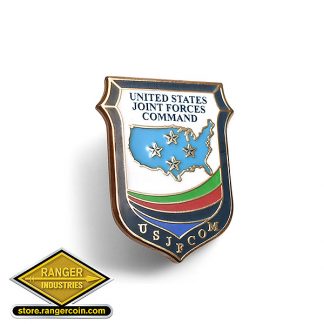