Minted in solid bronze, and then imbued with bold enamel coloring, this coin is dedicated to the men and women of the short lived but prestigious Air Force Cyber Command. The obverse features the proposed Air Force Cyber Command emblem, depicting a gauntlet crushing an olive branch and lightning bolts among the clouds. The reverse displays the logo of the United States Air Force.

This bold coin is finished in rich enamels and is to be carried with pride. 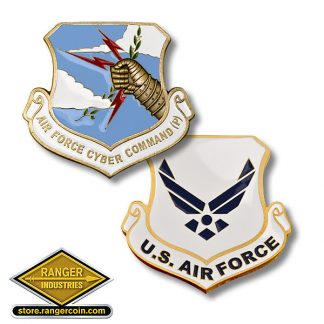