Engineered and built at Lockheed Martin’s super-secret testing facility, known as “Skunk Works,” the F-22 was designed as the replacement for the famed F-15 Eagle and was first introduced in 1997.

With a total length of sixty-three feet, eight inches, the F-22 features a wingspan of nearly forty-three feet, and is capable of sustained speeds of greater than 900 miles per hour. As America’s premier front-line combat aircraft, the F-22 greatly enhances the maneuverability of U.S. ground forces and strengthens America’s military advantage.

This coin has a antique bronze finish. 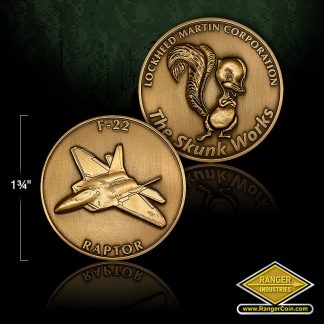