Designed as a single-seat fighter, the F-117 combines speed and precision with awesome combat capabilities. Featuring a compact body design and a wingspan of forty-three feet, four inches, the F-117 measures sixty-five feet, eleven inches from nose to tail.

As part of the 49th Fighter Wing of the U.S. Air Force, the F-117 performed exceptionally well in combat throughout Operation Desert Storm in 1991, executing some of the war’s most dangerous missions and providing critical support for American forces on the ground.

This coin salutes the F-117’s role in advancing America’s air superiority. Part of the Lockheed Martin “Skunk Works” Series, the obverse features a rendering of the F-117. The reverse bears the “Skunk Works” emblem.

Minted in bronze, this coin contains an antique bronze finish. 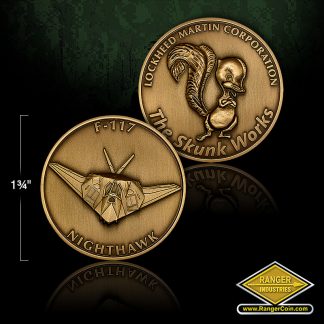