The 75th Regimental Special Troops Battalion (RSTB) was provisionally activated on July 17, 2006 and officially activated on Oct. 16, 2007 as a response to the demands of the War on Terror and the changing nature of Ranger operations. The activation of RSTB provides the 75th Ranger Regiment and U.S. Army Special Operations Command with increased operational capabilities to sustained combat operations. RSTB conducts command, control, communications, computers, intelligence, surveillance and reconnaissance functions in support of the 75th Ranger Regiment and other special operation task forces in order to enable the execution of joint special operations anywhere in the world.

Renowned for their superior skill, unmatched precision, and fierce discipline, the soldiers of the U.S. Army Rangers are members of one of the world’s most elite specialized fighting force. The term ranger has been in use unofficially in a military context since the early 17th century. There have been American military companies officially called Rangers since the American Revolution.

The modern Rangers have been deployed in Korea, Vietnam, Afghanistan, Iraq, Panama and Grenada. The Ranger Training Brigade is headquartered at Fort Benning and administers the Ranger School. Participants must complete the training with satisfactory performance, required to become Ranger qualified and to wear the Ranger tab.

This pin can be worn on lapels, gym bags, backpacks, lanyards or hats, and comes packaged in a protective polymer case perfect for display or to be given as a gift.

This pin is struck in eye-catching shiny brass with semi-cloisonné enameling and measures 1-inch (25mm) in size.

Ranger Industries is proud to bring to our customers this unique design, found here at store.rangercoin.com or by contacting us directly. 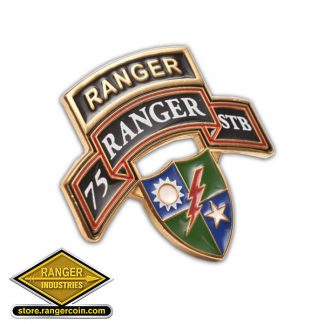