This coin pays tribute to all the courageous troops who have helped American forces move forward to victory in Operation Iraqi Freedom.

The brave fighting men and women of Operation Iraqi Freedom are honored for their role in toppling Saddam Hussein’s dangerous and destructive regime.

Exhibiting lightning-fast speed and overwhelming power, American forces crushed Saddam Hussein’s defensive forces in 2003, liberating the people of Iraq from his oppressive rule. Today, the American-led coalition continues its mission to strengthen Iraqi military and police forces in their fight to combat terrorism. Demonstrating exceptional courage, sharp focus, and a deep desire to accomplish their assigned mission, the veterans of Operation Iraqi Freedom have advanced the cause of freedom in the Middle East and throughout the world. By facing down the threat of terrorism in Iraq, they have strengthened America’s domestic security and bolstered our nation’s sovereignty.

This coin pays tribute to all the courageous troops who have helped American forces move forward to victory in Operation Iraqi Freedom. The obverse features a rendering of the nation of Iraq with the word “Veteran” boldly imprinted on the rim against a backdrop of federal blue. Depicted front and center on the reverse is the Operation Iraqi Freedom campaign ribbon.

Struck in a brass alloy, this coin is accented with bold enamel highlights on both sides. 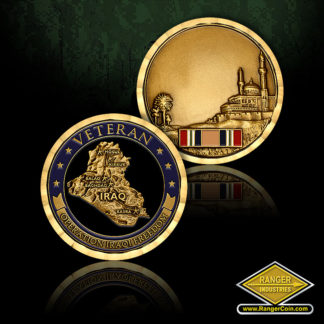