The SEAL teams, first established under President John F. Kennedy in 1962, trace their origins to the famed “frogmen” units of World War II, which specialized in underwater demolition and reconnaissance. An extremely versatile force, they can be deployed in virtually any environment and have successfully conducted counter-guerrilla and clandestine operations in every major American military campaign over the past forty years.

This medallion honors the outstanding achievements of the members of the elite Navy SEAL teams and pays tribute to their special contribution to the ongoing success of America’s military operations throughout the world. 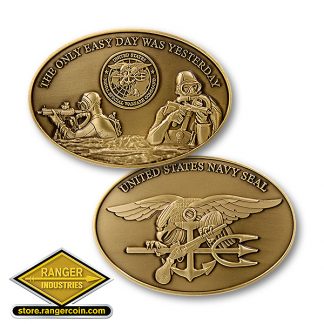